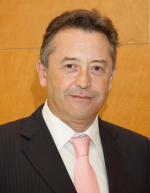 After graduating in Medicine (University of Valencia, 1978-1983) with the Extraordinary Graduation Prize, and completing his postgraduate training as a resident in Radiology (1984-1987), Dr. Martí-Bonmatí obtained his Doctoral Thesis (PhD) with his work on magnetic resonance imaging in liver tumors (Cum Laude, 1991). In 1995 he became Section Chief of Magnetic Resonance Imaging in the Radiology Department of Dr. Peset University Hospital (Valencia). Since 1997 he serves as Head of the Radiology Department at Quirón Hospital in Valencia, integrating biomedical engineering in the radiological innovation process in that center. In 2009, Dr. Martí-Bonmatí became Chairman of the Radiology Department and Director of Medical Imaging at La Fe University and Polytechnic Hospital, Valencia. That same year he was designated as Radiology coordinator of the Catholic University in Valencia, and in 2011 became Professor of Radiology and supervisor at the University of Valencia. He has been the Director of 49 Doctoral Thesis and End of Career Projects.

Since 2012, Dr. Marti-Bonmatí has been the Director of the Research Group on Biomedical Imaging (GIBI230) within La Fe Health Research Center, an institution belonging to the Spanish Research Network at the Spanish Ministry of Science and Technology. The group focuses on radiomics, imaging biomarkers and structured radiology, together with preclinical animal imaging experiments. He has co-founded QUIBIM (Quantitative Imaging Biomarkers in Medicine, QUIBIM), an innovative spin-off company dedicated to medical image processing, extraction and measurement of imaging biomarkers for clinical diagnostics, research projects and clinical trials.

In relation to his academic activities, mention should be made of his nomination as academic member of the Spanish Royal National Academy of Medicine (2015, in representation of Radiology). He has also received an Honorary Doctorate Distinction from the National University of Tucumán, Argentina (2015).

Dr. Martí-Bonmatí is a member of the Spanish National Radiodiagnosis Commission (since 2014), and has been Chairman of the following societies: the European Society of Magnetic Resonance in Medicine and Biology (ESMRMB), the Spanish Society of Radiology (SERAM, being awarded the Gold Medal of the SERAM in 2014), the Spanish Society of Abdominal Radiology (SEDIA, founder and Editor of its journal, Radiología Abdominal from 2004-2013), and the European Society of Gastrointestinal and Abdominal Radiology (ESGAR). In ESGAR, he has served also as President of the Annual Meeting Scientific Committee for Prague and Athens (2016-2017). He is also a fellow of the International Cancer Imaging Society (ICIS) and Director of the Association for the Development and Investigation of Medical Radiology (ADIRM), a non-profit institution developed to enhance the development of medical imaging by using the resources of local Universities and research groups.

The candidate is a lecturer and course organizer of the European School of Radiology since 1997, and a member of its Steering Committee since 2015.

Dr. Martí-Bonmatí has been Associate Editor of European Radiology (Magnetic Resonance) and Radiology (Computer Applications). He has also been a member of the Editorial Board of the journals Cancer Imaging and Diagnostic Imaging Europe. He is currently the Editor-in-Chief of Insights Into Imaging.

Dr. Martí-Bonmatí is the author of over 498 publications (262 of which are indexed in Medline), the Editor of 12 books, and the author of 57 book chapters. Most of his publications focus on Magnetic Resonance, Clinical Radiology, the development of Imaging Biomarkers, and Engineering-supported Biomedical Research.

He holds 10 patents and software registries, with two more in process.

The candidate has actively participated in 43 financed research projects, with a global budget of more than 42 million €. He has been the Principal Investigator in 14 of these projects, with a total financial support of 33 million €.