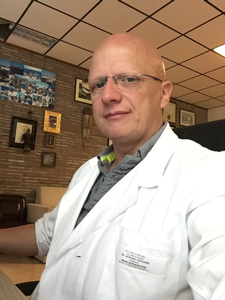 He was habilitated for full Professorship in Radiology in 2014.
Member of Italian Association of Medical Radiology, European Society of Radiology, Radiological Society of North America, European Society of Gastrointestinal Radiology, International Society for Magnetic Resonance in Medicine.
He is in the Editorial Board of “Radiologia Medica” since 2006 and “Radiology of infectious diseases” (2015-2017).
He is reviewer for “Radiologia Medica”, “Eurorad”, “European Radiology”, “European Journal of Radiology”, “World Journal of Hepatology”, “Cancer Imaging”, “Abdominal Imaging”. He has been involved in the Scientific Committee of ECR from 2005 up to 2010.

He has been meeting president of the 22nd annual meeting of the European Society of Gastrointestinal and Abdominal Radiology (ESGAR), Venice, May 21-24, 2011.
He is President of the Regional Committee (Veneto and Trentino-Alto Adige) of the Italian Society of Radiology (SIRM), 2013-now.
He has published 60 papers, 25 chapters of book, 82 abstracts and 36 posters.
His posters have been prized in several international meetings (ECR 2000, ECR 2001, ESGAR 2001, ECR 2002, ICIS 2013).
He has been given more than 250 lectures either in national and international meetings.
He has organized several meetings mainly focused on body MR and Gastro-intestinal imaging.